The Young Lions on the Waterfront 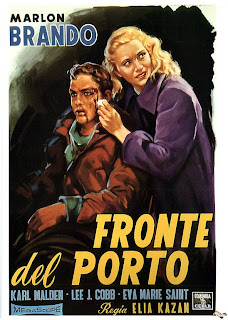 The Young Lions
World War II. Marlon Brando is a nazi, Montgomery Clift is a Jew and Dean Martin is... well, pretty much Dean Martin. Directed by Edward Dmytryk. One problem with old films is that the dialogues often sound artificial. This is one of those movies. There's a constant distance to the characters - they never seem believable as people. The war scenes lack credibility as well, despite the camera shaking every time there is an explotion, and Brando as the nazi officer comes off as impossibly naive and well intentioned.

On The Waterfront
Directed by Elia Kazan. This film has the intimacy that Young Lions lacks. The scenes between Brando and Eva Marie Saint feel true and are very touching. Ah, Eva Marie Saint! As the viewer you actually care about these people. There is nothing like the glove scene or the taxi scene in The Young Lions. Maybe that's because Kazan came from the theater, and he was looking for those moments of authenticity. The one thing they do better in films today is fake blood - in this film it looks like chocolate sauce.
Posted by Jason at 12:10 AM