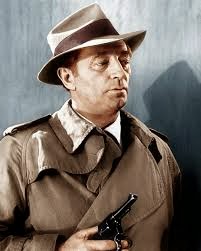 Mitchum is ten years too old to play the part, but an older, more tired Marlowe fits the character. Rampling was born to play a femme fatale. One problem with filming Raymond Chandler is that you lose the language. They keep the voiceover, but what works as written often sounds too clever when spoken. The timeperiod, 1941, is beautifully recreated, but visually it's not the most exciting film ever made - it needs a bit more style. Polanski's Chinatown and Altman's The Long Goodbye, that came out around the same time, work better as movies.
Posted by Jason at 12:08 AM