The Night of The Following Day 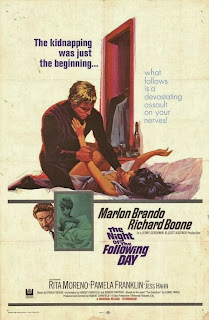 Marlon Brando is part of a team kidnapping a woman. Directed by Hubert Cornfield.

Maybe not a masterpiece, but an effective little thriller - slow and filled with tension. Claustrophobic as well since a lot of the story takes place within a beach house. The rain, heavy clouds and sounds of the waves in the background add to the mood. Best of all, the story is unpredictable, and almost a bit coenesque towards the end, partly because of the kidnappers' unnecessarily complicated plans for picking up the ransom. Brando apparently didn't get along with the director, but is very good in his part. Also, what was the first film to put a camera under the plane for the shot of the plane landing?
Posted by Jason at 1:05 AM