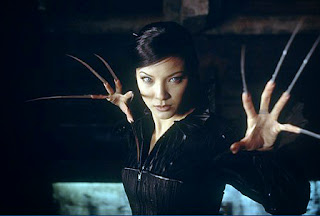 Why am I suddenly watching all these superhero films? I don't know. But anyway, I rewatched the first two X-men films. The CGI in the first one looks distractingly clumsy. The second one is a big step forward. Bryan Singer learned how to shoot action between the two films. And compared to a lot of the Marvel films like The Avengers, that look like tv with a bigger budget, Singer actually has the eye of a filmmaker.