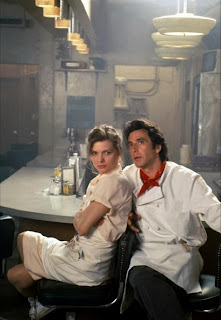 Rewatched Frankie and Johnny, directed by Garry Marshall. It's a pretty good film. I like that there is some sadness in it. It's about two real people, so of course they're played by two moviestars, Michelle Pfeiffer and Al Pacino, but okay, that's fine, that's Hollywood - and they're both great. The wisecracking gay friend / neighbor has become a big cliché in this type of films, but I guess this was maybe one of his first appearances.

Top 5 romantic comedies even a guy can see without puking:

1. The Fabulous Baker Boys
2. Moonstruck
3. Sleepless in Seattle
4. Before Sunrise
5. Frankie and Johnny

Crossing Delancey and Green Card are quite good as well - hell, even Knocked Up. Groundhog Day? I'm excluding older films like It Happened One Night and Roman Holiday since they're more like classic comedies or screwballs, before romcoms became its own genre and then ruined by Kate Hudson.
Posted by Jason at 1:31 PM