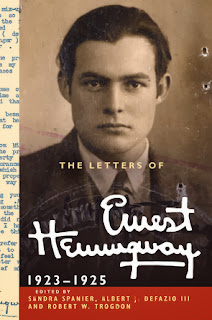 The Letters of Ernest Hemingway vol. 2
The book covers the years 1923 - 25, leading up to his first novel The Sun Also Rises. There are letters to his family, including still polite ones to his mother, and to friends like Gertrude Stein, Ezra Pound and Scott Fitzgerald. Some stuff about fishing and bullfighting, but he's still not the macho caricature he eventually ended up as.

The Voice Is All - The Lonely Victory of Jack Kerouac by Joyce Johnson
A sort of companion to Johnson's memoir Minor Characters. This book tells the story of Kerouac up to the point where they met, when he had finished writing On The Road. And that really was the peak of his life. She ends the book there, not going into his slow fall from grace, into a life of alcoholism and living with his mother. More than other biographers she concentrates  lot of time on his French Canadian background and how that influenced his writing.

Savage Continent - Europe in the Aftermath of World War II by Keith Lowe
A good book, mostly showing the great picture. And it's not a pretty picture, with lots of violence and killing even after the war ended. I would maybe have liked a bit more following the story of individuals over a longer period. But I guess there are other books that do that.

The Last Gunfight by Jeff Guinn
An interesting book, learning that it was Virgil Earp that was the police chief of Tombstone, not Wyatt, and that the famous shootout didn't even take place at the OK Corral. The backstory is fairly complicated. It's no wonder filmmakers just kept the names of the main characters and then made up the rest.

Palookaville 21 by Seth
I always look forward to a new Palookaville, but I found the Clyde Fans chapter to be a slightly frustrating read. Just when it's getting interesting it stops, and you have to wait a year or two for the next part. More than ever you can see the influence of Chris Ware in his work. My favourite part of the book is in his childhood memoir, Nothing Lasts, where the young Seth slowly realizes that his mother went through a period of mental illness and depression.

on page 120: Alone in Berlin by Hans Fallada. I found the writing a bit weak. There wasn't the small details that make the story ring true. The characters never come to life. And 120 pages, but not a single sentence, where you go Wow, and have to read it out loud?

on page 86: Sometimes A Great Notion by Ken Kesey. I found the style, the constant jumping back and forth between the characters, hard to read and not appealing. And constantly having to reread things to understand who he was talking about... Maybe I'll give it a second try later.
Posted by Jason at 1:10 PM