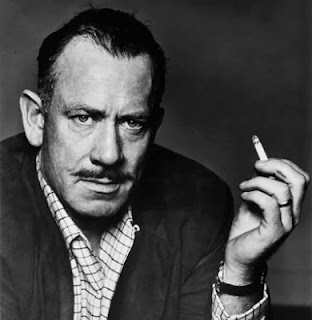 John Steinbeck by Jay Parini
A good biography about the writer. So far I've only read his masterpieces, Grapes of Wrath and East of Eden, and I should check out some of his other books.

Fool for Love: F. Scott Fitzgerald by Scott Donaldson
Not as much a biography as a search for the writer through his books. I guess I prefer Hemingway of the two, but in the end I think Fitzgerald was probably a more interesting person, The Crack-Up essays a braver thing to write than Hemingway's And then I went to Africa and shot half the animals there.

The Lonely Hunter by Virginia Spencer Carr
Her big, fat biography of Carson McCullers, about the writer's fairly short and troubled life.

Minor Characters by Joyce Johnson
Her memoir about her time with Jack Kerouac, and what it was like being a woman in the Beat generation.

Jack's Book by Barry Gifford and Lawrence Lee
An oral biography of Kerouac. Not bad, but a bit thin compared to some of the later biographies.

Pagan Babies by Elmore Leonard
Good, but maybe not great book from Leonard.

In One Person by John Irving
I like that there is some anger behind the book, as in some of Irving's best books, like Garp and Cider House Rules, but the characters don't really jump off the page the same way Melony or Owen Meany did.

Hellboy: House of the Living Dead by Mike Mignola and Richard Corben
I enjoy Corben's drawings. I wish the book had been longer and Mignola had gone a bit deeper in the story. And I wish they had used a good oldfashioned letterer. The computer font and sound effects clash with Corben's rawer art.
Posted by Jason at 12:02 AM