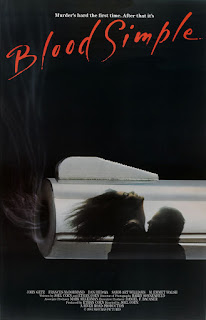 Their first film, and it still holds up well. The low budget shows sometimes, with lots of static camera shots. There are some places where they're showing off, just to show off, but that's fine, that's what first time directors are supposed to do. The dolly track over the drunk guy in the bar is still fun. The mostly wordless sequence at the end is still some of their best work. And the piano theme is among the catchiest scores they've done (well, outside of O Brother.)

Re-watching the film now, I realized there's a scene of the client contemptuously throwing money on the prvate investigator, that I had pretty much ripped off in Lost Cat.