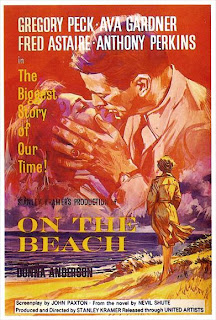 A nuclear war has wiped out life on most of the globe, except for Australians who keep singing Walzing Matilda. Starring Gregory Peck and Ava Gardner, directed by Stanley Kramer.

Not the most cheerful film ever made. Actually, it reminded me a bit of Bob Dylan's Talkin' World War III Blues. It's strange to see Fred Astaire in such a serious film, but he's good. Peck is a bit stiff. Gardner is great. She must be around 40 years old here, but looks amazing, showing a vulnerable side that maybe wasn't there when she was younger. And she came from the old Hollywood system that produced stars, distant godesses, not necessarily actresses.
Posted by Jason at 1:54 AM