Down by Iron Man 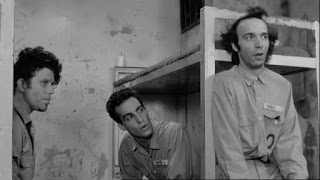 Down by Law: It's a sad and beautiful world. Just like Stranger Than Paradise it gives a European look on America. The film was made in the 80s but has a timeless look. It could be from the 50s or from yesterday. I like that it takes its time to show boredom. Half an hour of the film takes place in a small cell. Also that Jarmusch just skips the actual escape, a sequence that could have been milked for tension, as if he just didn't find that interesting.

Iron Man 3: Yes, I went to see it. Why? Why, oh Lord? I don't know. It got good reviews and I liked the first one. It has some good stuff: The Air Force One passengers rescue, Iron Man fighting henchmen with only part of his Iron Man suit and the Mandarin reveal. But as a whole it's kind of tiresome. The climax of the film is so long and dragged out that half way through it you get bored. And when the story is over, end the film. Don't go on for another five minutes.

I saw Down By Law when it originally came out. It has images that has stuck in my head. Why is it that I saw Iron Man a couple of days ago and already I have problems remembering it. There are no really memorable images. Is it because of the number of images in the film, the fast editing? The scene of Benigni telling how he ended up in jail lasts minutes. Does the length of the shot and the static camera make it engrave itself in your brain?
Posted by Jason at 1:00 AM