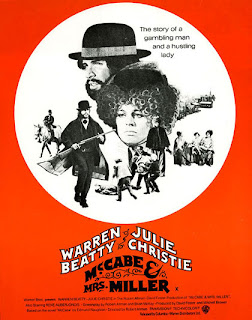 I haven't seen that many Altman films. Just this one, The Long Goodbye and Short Cuts. Personally I find them a bit hard to like - they're just too slow and not very fun. But that's a matter of personal taste. At least they're films for adults, something that hardly exists anymore. I liked the use of Leonard Cohen songs and the ending is very effective, despite the obviously fake snow storm. And I'm still curious about his film Nashville - I'll watch it if I find a copy.

A big budget three hour epic about an American communist? How the hell did this movie get a greenlight? By Warren Beatty being a big star at the time, I suppose. Anyway, it's pretty good. It takes its time, making us care about the characters. I must confess I don't know much about John Reed and the Wobblies and all that, only what I've picked up from reading Dos Passos. The film has lots of political arguing and so on, but there's also the good old reuniting of two people in a train station scene, always a classic.
Posted by Jason at 1:03 AM