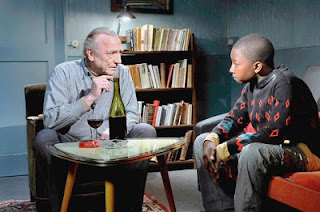 Possibly not Kaurismäki's best film, but very hard to resist. A mix of Poetic Realism and Deadpan Fairy Tale, with the usual Finnish melancholy underneath, and probably Kaurismäki's most political and most optimistic film. It's a long way from The Match Factory Girl. Old Aki is growing softer, like most of us. There's a belief in the community and the good of man. Without making you want to puke. The cinematography has a touch of Edward Hopper, with diagonal lines of light from the windows.
Posted by Jason at 1:37 AM