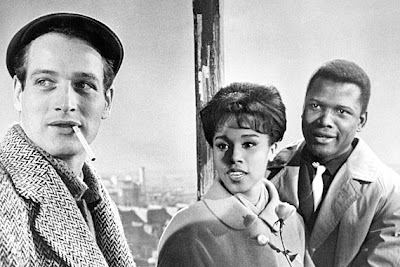 The film looks great in black and white, but is less interesting than other Newman films from this period, like Hud and The Hustler. It just feels less authentic. There are exterior shots from Paris, but interiors seem to be filmed in a studio. The film is completely out of touch with the nouvelle vague that was happening in France at that time; A bout de souffle came out the year before. It rather gives a kitchy impression of Paris that would have fit better in a 50s film. There is some talk of race and drugs, and as can be seen on Mad Men, women were seriously sexy during the early 60s - those tight skirts and sweaters! - but as a whole the film feels a bit pale and bloodless.
Posted by Jason at 1:39 AM