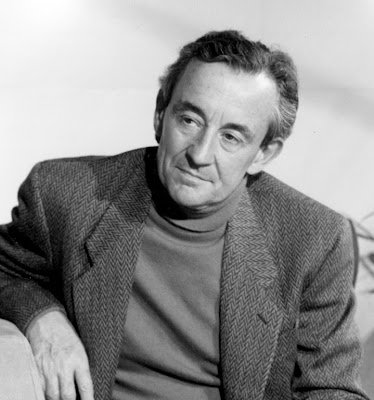 I've been curious about Louis Malle, only knowing his American films, so I got the collection of his early French films, and will start watching those. First up: Lift To The Scaffolds. Jeanne Moreau and Maurice Ronet are the lovers whose plan it is to kill her husband and make it look like a suicide. So far everything works out, but then fate steps in. Also starring Lino Ventura as a policeman, music by Miles Davis.

The film reminded me of the Coen brothers, the way that nothing goes as planned and the characters constantly being tripped up. Malle tells the story in a nonchalant style. He doesn't really seem that interested in the plot. Instead we get a long sequence of Moreau walking around in Paris, in the rain, looking for Ronet and having a very French and poetic voiceover. The film has almost a dreamlike quality. Ronet climbs up a building in broad daylight, easily visible from the street, but is apparently seen by no one. After the killing he then forgets to bring the rope with him, starting the whole chain of reactions. It's a bit hard to believe, but in a dream it would make perfect sense. The two main characters never curse the Gods for what is happening, instead calmly accepting the way their well laid plans fall to pieces, ending the film just as it begun with a close up of Moreau's face.