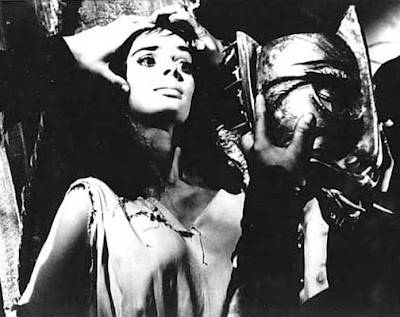 Got the first box of Mario Bava films and will be watching those, starting with The Mask of Satan or Black Sunday. Barbara Steele is sentenced to death for being a witch. 200 years later she comes back from the grave to seek revenge.

The only Bava film I had seen before this was Bay of Blood, that I didn't care for too much. This film however, his debut as a director, is something completely different. Shot in stunning black and white, it's a more classic horror film, closer to Poe or Stoker, and simply dripping of atmosphere, with deep shadows, naked trees, fog and spiderwebs as far as the eye can see. A masterpiece, that you can find the influence of in Tim Burton, Sam Raimi or Mike Mignola. As for Steele, a Gothic dream goddess, I prefer to believe she is a witch for real, and that acting is just something she did to pay rent.

In Italian films the sound is always put in later, and the dubbing is something one just has to get past. It's not too bad in this film and actually helps in giving it more of a dreamlike quality.
Posted by Jason at 1:38 AM