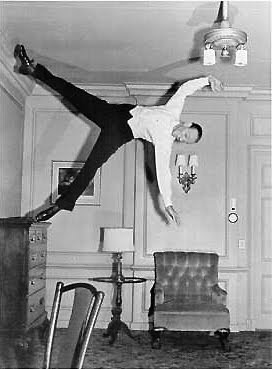 Got a bunch of Fred Astaire dvds. I've seen most of the films he did with Ginger Rogers, so I've been buying some of the other ones. First: Royal Wedding, from 1951, directed by Stanley Donen. Astaire and Jane Powell are brother and sister dance partners on tour in London. Also starring Peter Lawford.

The most famous sequence in this film is the one where Astaire dances on the ceiling and that was recently ripped off in Inception (always thought that film needed a song and dance act). There's also the scene of him dancing with a hatstand. Both of those are on youtube. If you've seen them there is really no need to see the film, which is not that good, really. Astaire is getting a bit too old here to have a romantic lead, and the scenes of Powell and Lawford are boring. A lot of the musical numbers, like the Haïti one, are for the show within the film and doesn't really have anything to do with the story. And I miss the comic relief of the early Astaire and Rogers films. Having seen those films in black and white, the use of colour in this film seems almost distracting. And also, the quality of the transfer is not good, it's like watching a videotape. The film is no masterpiece, but still, it's a shame.
Posted by Jason at 1:21 AM