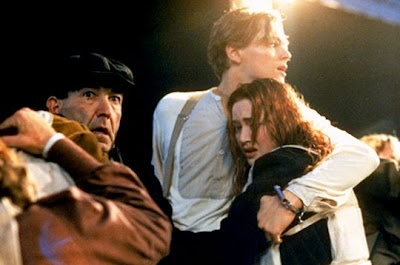 Why am I watching Titanic?? I felt like it, allright?! Leave me alone, will ya! I'll watch Titanic if I want to! I don't have to explain myself... I'll watch Last Year in Marienbad tomorrow, okay?! So, anyway... Written and directed by James Cameron

The film is some sort of pop art masterpiece. I wish Cameron had taken out some of the cheesiest lines, but asking for more three dimensional characters is kind of missing the point. I'm not sure if that would make it a better film. Actually, there should have been a scene of Billy Zane twirling his mustache. Well, he would have to grow a mustache for that. Cameron is very good in the way he introduces his female characters: Winslett in this film, Mastrantonio in The Abyss and Linda Hamilton in Terminator 2. The film never drags, but they screw it up towards the end, trying hard not to make it too much of a bummer. The scene of old Rose throwing the diamond into the sea is clearly supposed to be a big, emotional moment, but... it's not. It's kind of silly. And really, Cameron, Celine Dion?!
Posted by Jason at 12:29 AM