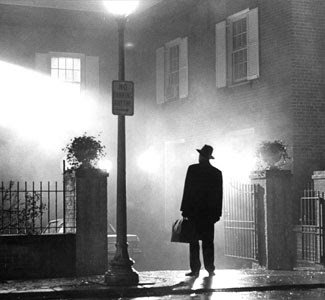 Linda Blair pees on the carpet, masturbates with a crucifix and spins her head around. Max Von Sydow comes to the rescue. Directed by William Friedkin.

It's difficult not to notice how slow the film is. Slow seen with modern eyes, that is. The moody Iraq prologue lasts 10 minutes, for chrissake, the first bed shaking sequence comes at 45 minutes. If made today that would probably have been the first ten minutes of the film. It's slow, but we actually get to know the characters before shit starts to happen. One thing that gives the film its power is that Friedkin never shoots it as a horror film. The copy I have is the extended edition, so it also has the spiderwalk sequence. These early scenes of demonic possession are the most creepy ones. When they give Blair the makeup and start doing the different voices it actually gets less scary. I read somewhere that Jack Nicholson auditioned for the part of the young priest but Friedkin didn't want him, and I can't help but imagine how that film would have been.
Posted by Jason at 12:32 AM