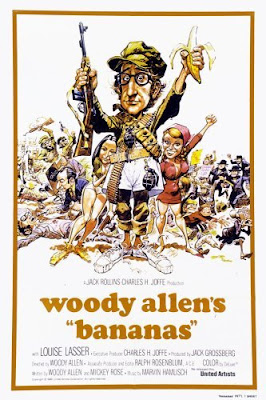 Woody Allen is dumped by his girlfriend Louise Lasser and leaves for South American republic San Marcos where he gets involved in a revolution. Directed by Woody Allen.

Maybe the weakest film so far, but there are some good scenes, like the interpreter at the airport bit. There's also the scene with a young Sylvester Stallone. But a row of gags doesn't necessarily make a film and you can't help but feel a certain emptiness, with characters that are not much more than clichés and stereotypes.
Posted by Jason at 10:47 AM