Return of The Fly 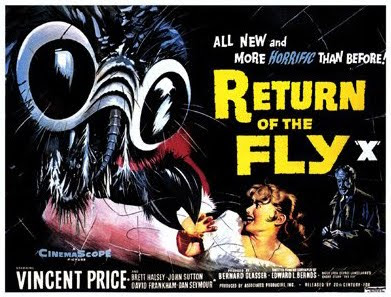 The son of the original scientist apparently didn't learn anything from that film and keeps messing with nature. Starring Vincent Price.

The original The Fly has it's moments. The sequel is a lot sillier. You can imagine the scriptwriter having sleepless nights trying to come up with a reason for the son of the scientist also turning into a manfly. And producers breathing down his neck: "We not only want a manfly, we also want a manrat. Have the script finished on Friday." The sollution doesn't make much sense. On the other side - we learn that the story takes place in Montreal, so that explains the French accent in the original film. And it's only 75 minutes.

It makes you wonder, though, were people actually frightened by these films? Or were they giggling in the aisles back in 59? It's sort of a horror movie for kids. I would have liked to see this film when I was nine or ten.
Posted by Jason at 1:10 AM