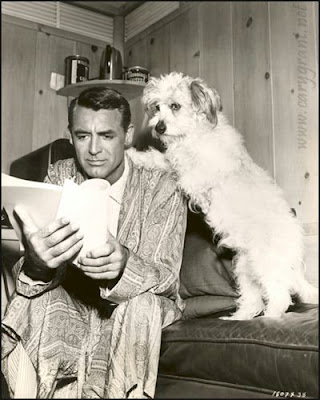 Three reasons why it's difficult to take the Oscars seriously:

1. Cary Grant never won for best actor.
2. Hitchcock never won for best director.
3. Crash won for best film. One of the worst films ever made; it's more of a lecture, actually, than a film, without a single credible character or line of dialogue. It's like a guy yelling "Racism is bad!" in your face for two hours. Or one hour in my case since I left the cinema - the only time I've walked out on a film before it was finished.

Anyway, back to Grant. It's difficult to choose, but I'd say His Girl Friday might be his best performance. I haven't seen all his films, though. I've been buying some more of them lately. I had planned on watching Operation Petticoat first, but gave up after half an hour. Apparently not all his films are masterpieces, especially from his later period. So I rather popped in Holiday, his second film with Katharine Hepburn, directed by George Cukor. If you base a comedy on how many times you laugh, this is a poor film. It's more appealing than actually funny. Grant gets to show off some of his acrobatic skills, and of course he's got great chemistry with Hepburn. The film's got class, okay?

Oh, and reason number four: Al Pacino won for best actor - not for The Godfather or Scarface or Dog Day Afternoon, but for Scent of a Woman.
Posted by Jason at 1:08 AM