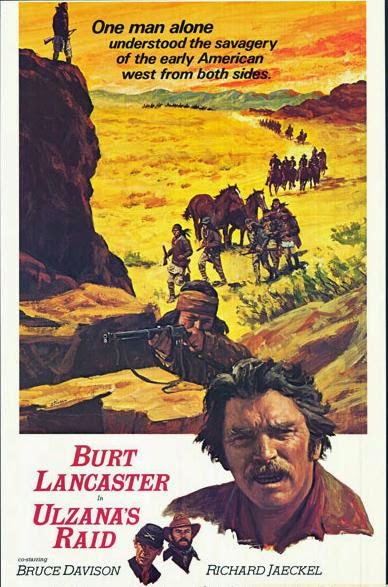 Apaches go on a raid. Burt Lancaster and a group of soldiers are sent to capture them. Also starring Richard Jaeckel and at least two actors from Little House on the Prairie, directed by Robert Aldrich.

This is a good Western, but it's a pretty dark film, which might be why it flopped on release. We see a soldier shoot a white woman to prevent her from being raped and killed by Indians. We see dead men, tortured by Indians. Well, it happened. In the end, the film is more respectful to Indians than films from the 50s where they were played by white, blue-eyed actors. And of course, white people committed similar crimes. The editing in the film seems a bit off, as if scenes have been cut. The older Lancaster fit well in Westerns, and Aldrich put the Vietnam war into this one.
Posted by Jason at 12:02 AM