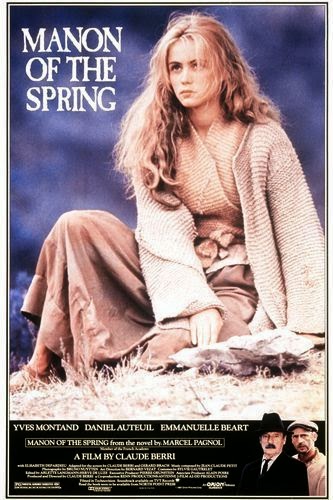 Provence, France, after World War I. The battle for a water source on a piece of land leads to tragedy. Starring Gerard Depardieu, Yves Montand, Daniel Auteuil and Emmanuelle Béart, directed by Claude Berri.

French movies in the 80s was more than just Luc Besson or Betty Blue. I remember watching these two films when they came out. I liked the first one, but didn't quite see what all the fuss was about, and then it really paid off at the end of the second one. The three main actors are all terrific. Depardieu has become kind of a joke - it's easy to forget he was a good actor once. And Auteuil is great as a halfwit. It's a role that easily could have been overplayed. Re-watching the films, I pretty much remembered all of the first one, but for some reason had forgotten all but the ending of the second one. It's a nice change to see a film where the climax isn't cgi stuff blowing up, it's a conversation between two old people sitting on a bench. And it's riveting.
Posted by Jason at 12:12 AM