The Ugly American from Hong Kong 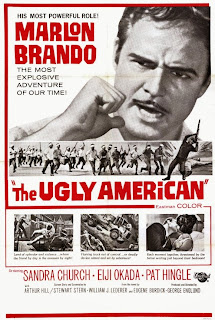 The Ugly American, by George Englund.:
It's the Cold War. Marlon Brando has a moustache and smokes a pipe. A slow and talky film, not very exciting or visually interesting, but Brando is pretty good and gets to do some real acting, in contrast to a film like Desirée.

A Countess from Hong Kong, by Charlie Chaplin:
A screwball-ish comedy, with Marlon Brando trying his best to do chaplinesque physical humour. It's not a good film, and feels pretty dated, but the doorbell gag, where everybody jumps up and runs to the bathroom is somewhat funny. Sophia Loren looks great, though. I think this is just the second film I've seen with her, the first being Arabesque that she did with Gregory Peck. I'm sure she must have done some better films.
Posted by Jason at 1:09 AM