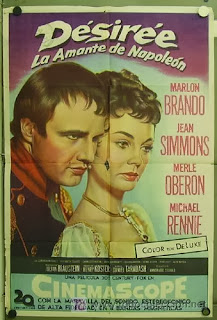 Those big cinemascope films from the 50s today seem to have been a step back for film. Okay, the screen was double as wide as a tv-image, but the films were more about perfect compositions and that vase in the background than they were about the characters - the opposite of  the chaos of real life. Close-ups weren't possible, so there's a constant feeling of distance, both between the characters and between the characters and the viewer. The film has none of the impressive fight scenes that you after all could find in War and Peace. Thank god it doesn't last three hours. I'm sure Brando could have been a good Napoleon, but this is not that film.
Posted by Jason at 12:07 AM