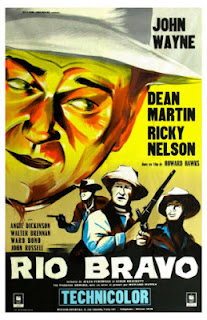 After Assault on Precinct 13, good as it is, I wanted to see the real thing: Rio Bravo! John Wayne is the sheriff, and Dean Martin his deputy. Also starring Ricky Nelson, Walter Brennan and Angie Dickinson, directed by Howard Hawks.

A great Western, and one of the most entertaining and rewatchable films ever made. The story takes its time, but we enjoy the company of the characters, so what's the rush? And no matter what people say, John Wayne was a good actor! He doesn't mind being made to look like a fool in front of Angie Dickinson. Dean Martin is terrific as well. I love the sequence where he and Ricky Nelson sing. Would it even be possible to get away with something like that today? Outside of maybe a Wes Anderson film, I think not, and it's our loss. A movie has to be more "realistic" today, but often end up just being less fun - the Assault on Precinct 13 remake being an example.
Posted by Jason at 1:13 AM