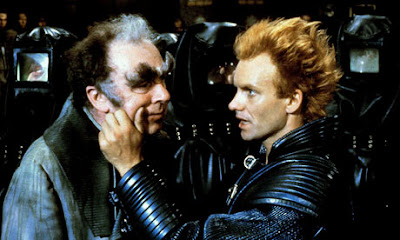 I re-watched Dune the other day. Okay, it's not a perfect film... It's complicated and overserious. Half the time you're sitting there, thinking, what the hell is going on?! The dialogue is stilted; hearing the characters' thoughts doesn't help. The acting is not very good. Or it's as if they're acting in an old silent film. The music is by Toto for chrissake. But I can't help but like the film. It has a unique look, the whole Victorian influenced production design. The worms look great. The opening scene with the mutated navigator is terrific. And then, unfortunately, it falls apart.

I also found a used copy of Avatar and gave it a new look. The first time I saw it was in the cinema, but the 3D glasses gave me a headache, and after the first hour I just sat there waiting for the film to end. The film has the look of a progrock albumcover from 75, that same airbrushed look. Everything is too perfect. What kind of jungle looks like this? And doing everything in the computer, it feels like the director is tempted to put in too many details. It makes me think of the Emperor (?) in Amadeus: There's simply too many notes! Okay, the dinosaurs look good, and the flying dinosaur sequences are impressive, but the aliens, the navi, still look fake. And it's hard not to compare the final fight with the one in Aliens, where Ripley fights the alien queen, which one looks most real and intense?

I watched Dr. Zhivago some time ago. The film is from 1965. If it was made today, almost fifty years later, it would almost certainly not look as good. Then everything was filmed in camera, today there would have been lots of CGI, and sorry, but most of it still looks fake. The simplest thing, like a blue sky and clouds outside a window, looks fake. If Jaws was made today, would it be as good? What's scary about the original one is that we almost never see the shark! Today it would have been there from the beginning. The first and the last Indiana Jones film, which one looks best? Will the new Alien film look half as convincing as the original one?