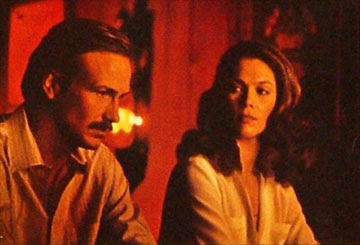 A nice little film noir exercise. One thing about the neo noirs from the 80s and 90s is that the person commiting a crime actually can get away with it. He or she doesn't need to be caught and punished like in the classic films. And they can also be seen having sex, like in this film, it's no longer only implied that they do, by swapping cigarettes or slamming doors or whatever. The neo noir director is aware that he is doing a noir, something Wilder was not while doing Double Indemnity. For him it was only a crime film - there were no film noir rules set in stone to follow. Like in that film, the dialogue has an artificial quality. Rourke is the one normal person, the outsider not being a part of the noir universe. He's the voice of reason in the film, asking Hurt not to go through with it. But of course, it wouldn't have been much of a noir film if Hurt had listened.
Posted by Jason at 4:16 AM