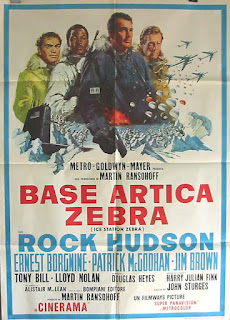 Hail, Caesar!
Okay, the film has some charm, but it's pretty forgettable. It goes all over the place plotwise, and really, Coens, kidnapping, again? All the actors do good work, but I wish the story had been stronger, and that there was a reason I as a viewer should care about what happens.

Ice Station Zebra
This is sort of a perfect film for a lazy sunday. It's a classically directed, oldfashioned film. A whole hour goes by before the first action sequence. And the North Pole scenes are obviously filmed in a studio, yes! that's the way to do it! Ending is kind of anti-climatic, though.
Posted by Jason at 2:09 AM