The Man Who Shot Liberty Valance 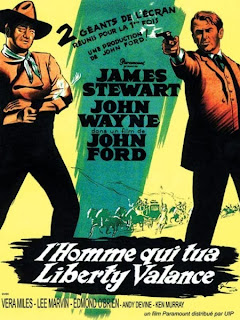 So okay, it's got the famous line, "Print the legend.", but I find it hard to like this film. All the broad comedy bits get a bit tiresome in the end. It dates the film. Stewart is miscast - too old to be convincing in the flashbacks where he's supposed to be a young lawyer. John Wayne does the John Wayne thing. And then there is Lee Marvin who seems to be acting in a much darker film. There are constant clashes in tone. In the end, it's an old man's film, Ford's more resigned look back on the genre he was most known for.
Posted by Jason at 1:09 AM