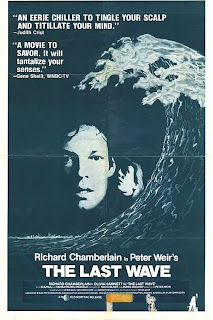 Richard Chamberlain is a lawyer defending five Aboriginals in court. He has strange dreams. Meanwhile the weather goes bananas. Directed by Peter Weir.

I saw this film on tv as a kid back in the 70s, but the only thing I remembered was the Are you a fish? scene. It should be a double feature with On The Beach, another End of the World in Australia film; there's a definitive millennium / 2012 feel to it, making it more relevant, not less, than when it was made. It's a slow film, possibly even a bit pretentious, but sometimes you miss that in movies, before reaching that haunting final image.
Posted by Jason at 12:42 AM