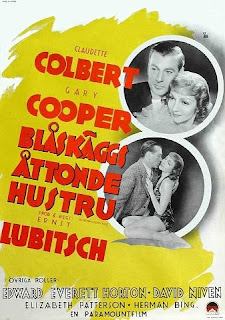 Now this is more like it! A better screwball comedy, in my mind, than The Palm Beach Story. A witty script co-written by Billy Wilder, with Cooper in his prime rather than the old guy in Love In The Afternoon, Colbert is very appealing, they're great together and there's even Edward Everett Horton doing the Edward Everett Horton thing.
Posted by Jason at 12:29 AM