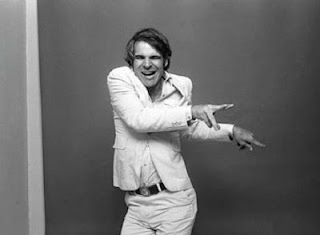 There's a collection out of Steve Martin's tv specials and appearances. I have his stand up cd's, but his comedy is very visual, so something is definitely lost with only the sound. There are two stand up acts on the dvd. The best one is on a small stage and is Martin at his most hilarious. There's another one, from the end of his stand up career, where he's in front of thousands, and he has to do everything bigger, and it's a bit less fun. Plus it repeats some bits from the earlier show.

There are also some sketch shows, that are more uneven in quality. Some of it has dated quite a bit, including song and dance numbers in corny variety show style. Included is also new interviews where he talks about his career in comedy. After his later, more safe and bland films, it's good to have this collection to remember how brilliant he can be. And that is why we have to protect the ozon layer!
Posted by Jason at 5:46 AM