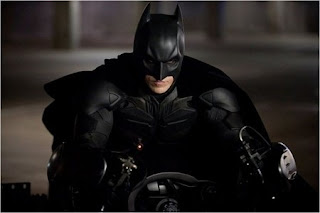 So, I went to see Dark Knight Rises. The difficult third film... Ok, it's not as bad as Spider-Man 3 or X-Men 3, but it was disappointing compared to The Dark Knight. I thought the two first films were good, but ruined by dragged out, chaotic third acts. If I re-watch the second film, I usually just turn it off after The Joker in nurse uniform scene. The third film I found to be the opposite of this. The two first acts of the film are pretty dull and clunky, and then it's saved by the quite exciting last act. Nothing as memorable as the pencil scene or The Joker sticking his head out of the cop car window, though.

It's a problem in the Nolan films, all the exposition. There are seldom people talking the way actual people do.There's also a self indulgence creeping into the later films, possibly because people are throwing money at him. I almost wish he would go back to the low budget film making of Memento, his best film in my mind. I don't think Inception would have lost much if he had been forced to cut the silly James Bond stuff. Still, at least this last Batman film has a personality, it's not a safe, by committee-film, no matter how much of a mess it is.
Posted by Jason at 8:03 PM