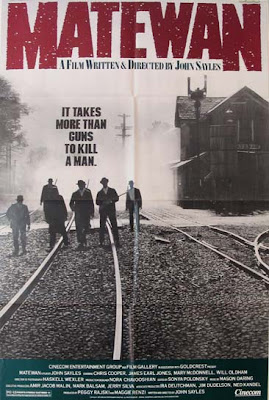 West Virginia, 1920. Coal miners and a union organizer have to fight the Mining Company. Written and directed by John Sayles.

The film is based on real events, the socalled Matewan Massacre. The Depression hasn't even started yet, but things are already pretty rough. There are actors that later will be better known, so watching the film you constantly go, Hey, there's that guy from NYPD Blue, there's that guy from Shawshank Redemption. Hey, it's that woman from Dances With Wolves. There's the Sayles regulars Chris Cooper and David Strathairn. There's even Darth Vader and Bonnie Prince Billy! Will Oldham is actually pretty good in his role as a young preacher. The film is almost a Western in the way it opens with a stranger arriving in town and ending with a big shootout. Unfortunately, it came out before the independent film boom of the nineties. If released a couple of years later, by, say, Miramax, it could maybe have been nominated for an Oscar for best film. It would have been well deserved.