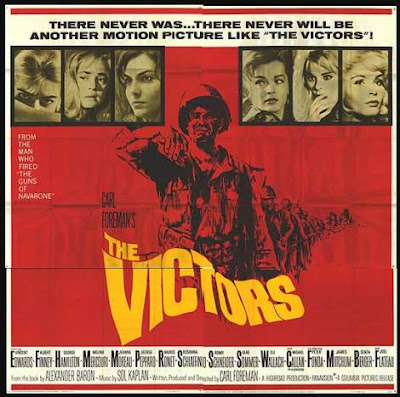 I discovered this film by accident late one night on a French tv channel. I had missed most of the film, only getting the last half hour or so, but its bleakness made me want to watch the whole thing. Now, the dvd I have is 146 minutes, and apparently the film originaly was 175 minutes, so that's half an hour missing. A complete version would have been nice, thank you. It's actually a very interesting film, an anti war film in the style of the more famous Paths of Glory, and quite episodic: Characters disappear for a long time, then re-appear, without us knowing what has happened to them in the meantime. There are several memorable moments in the film. It shows an American deserter being executed, white American soldiers beating up black soldiers in a bar, even a soldier shooting a dog! Most memorable is maybe the scene of Wallach in the hospital, his face ruined. I don't understand why this film has fallen through the cracks, being so little known.
Posted by Jason at 10:23 AM