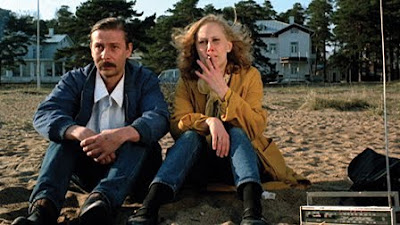 It's a good film, a sympathetic look at the lives of two lonely souls in an uncaring world and the dreams of the working class, but it's not one of Kaurismäki's best films. For one thing I missed the humour from films like Contract Killer and Ariel. And he doesn't flirt with melodrama or genre as he does in those two films. As always, nothing is dragged out, the film clocks in at 71 minutes. There could be a drinking game for this film if you watch it at home. Have a drink every time someone in the film takes a drag from a cigarette, and then see if you can stand on your feet when it's over.
Posted by Jason at 12:19 AM