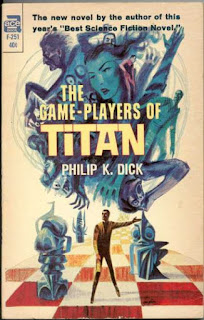 Cantata-140 / The Crack in Space by Philip K. Dick
Is this his weakest book? As usual, there are lots of crazy ideas, but here they don't ring true. The way the existence of a parallel Earth is dicovered and how this is told to the media by politicians is not too convincing. And there's a weak ending as well.

The Game Players of Titan by Philip K. Dick
One of his best. And funniest. Would be a good film, Hollywood!

We Can Build You by Philip K. Dick
THIS is his weakest book, I'd say. Gave up on page 150, with another 100 pages to go. Dragged out scenes and dialogues, characters not very interesting and a plot that seems to go nowhere.

Galactic Pot-Healer by Philip K. Dick
His weirdest book? It's good though. And unpredictable.

The Cosmic Puppets by Philip K.Dick
One of his earliest books. It has the Dick theme of what is reality, but the concept could also be an old episode of The Twilight Zone.

This is London by M Sasek
Charming, like the other books, but again, the reproduction of illustrations could have been better.

The Discovery of America by Saul Steinberg
Another Steinberg book to put in my collection next to The Passport, Labyrinth and Inspector. Brilliant. I should read the biography, I suppose.
Posted by Jason at 5:06 AM