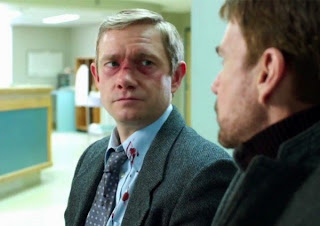 Mad Max: Fury Road
The pre-title sequence gave me a bad feeling. I found the MTV style fast editing unappealing. The saturated colour made everything look unreal, and the flashbacks of the dead daughter were annoying. It's hard not to compare this film to the second one, which was pretty much perfect. That film was better structured, and Max was a more interesting character. In this one I enjoyed the insanity of the last chase sequence, but you could see some of it was filmed against a greenscreen, and it takes you out of the film a bit. In the second one, it was all filmed on camera, and how all the stuntmen survived that film is a miracle. That authenticity and feeling of real speed is hard to beat. Also, there weren't any memorable small moments, like the kid getting the musicbox in the second film.

Fargo season 1
Aw Jeez, I didn't have any expectations for this series. Maybe that's why it delivered and then some. I enjoyed the show more than True Detective, especially the strangeness of the eight episode, and then, that ninth episode was just incredible. If you look up "tension" in the dictionary, there must be a photo from this episode, I betcha, yah.
Posted by Jason at 1:40 AM