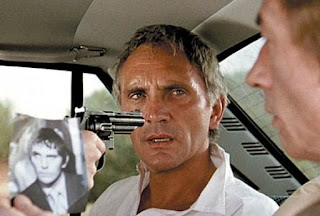 A good film, part road movie, part philosophical drama. Frears is more of a meat and potatoes director, less stylish than other Brits, like Ridley Scott and Alan Parker, but he gets the job done, the images never getting in the way of the story. A story that is quite hard to guess where it will end up. Only at the end does it stumble a bit. It reminded me of In Bruges; I wonder if it was an inspiration for Martin McDonagh.

If someone should send a hitman after me one day, I would like for it to be someone like John Hurt in this film, glum looking, with sunglasses and a cigarette dangling in the side of his mouth. I think that would be okay, a proper way to go. I'd put up less of a fight than if it was some prettyboy a la Clive Owen or someone. When Hurt takes off his glasses, there are worse things that will be the final thing you see. Looking into his haunted, tired eyes, it will, somehow, make sense.
Posted by Jason at 1:54 AM