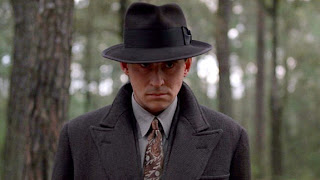 Gangsters walk in the woods looking for a hat. Starring Gabriel Byrne, Albert Finney and John Turturro, written and directed by the Coen brothers.

What's the rumpus? It's still the Coen brothers' best film. It might be fairly low budget, but it looks great. It has both the small moments and the big setpieces, and a beautifully constructed script that is endlessly quotable. I was just speculatin' about a hypothesis. But was it even nominated for an Oscar? Nuts! Shame on the Academy. Look into your heart. Eddie Dane is a great bad guy and Jon Polito as Johnny Caspar is strangely sympathetic, almost running off with the film. Always put one in the brain. Re-watching it, you notice small details, like the number of times Verna says "heart". A masterpiece, but if I'd known we were gonna cast our feelings into words, I'd've memorized the Song of Solomon.
Posted by Jason at 12:46 AM