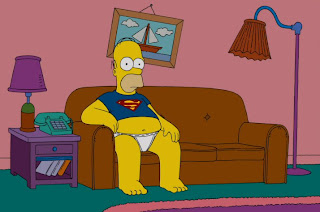 It's strange to watch episodes of The Simpsons dubbed into French Canadian. It's very different from the French dubbing. It's also strange to watch the early episodes, how much it has changed. But it is only to be expected, I guess. It takes some time for cartoonists and animators to find the characters. I also saw a newer episode and was a bit surprised by how far the quality has sunk. In the episode Lisa meets a boy referred to as hemingwayesque, and in a dreamsequence we meet Hemingway's two first wives, Hadley Richardson and Pauline Pfeiffer. So it was interesting, surreal almost, but it forgot to be funny!

There's about 50 channels on my tv here, a mix of Canadian and American. There are lots of shows I've never seen before, but the only one that actually is pretty funny and has likable characters is Big Bang Theory. One of the channels sends an episode each evening, so I will have seen the two first seasons by the time I go back to France.

And, apropos of nothing, is there something particular about Canadians and tattoos? It just seems a lot more common here than any other place I've been.
Posted by Jason at 5:26 AM